Summary: A frustrated peddler tries to recover his stolen caps from a group of monkeys.

Story Treasure: Hat (I bought pirate hats in Walmart’s Halloween clearance, but most Dollar Stores have dress-up hats that would work, too)

After reading the story, before beginning centers, we reenacted the story.  I was the peddler and the students were the tricky monkeys. MATH: Counting
From the suggestion on pg 53 of Before Five in a Row, I made cards for each kind of coin.  You can download the cards I made here: Caps for Sale_Money Cards.  I brought in enough coins to fill each card and let the students take turns filling the cards.  Note that many toddlers will not be ready for this activity and for very young toddlers the coins will pose a choking hazard.  That being said, two of my students were enamored with filling the cards over and over.

SCIENCE: Health
We did the activity on pg 54 of Before Five in a Row, using pillows.

MOTOR SKILLS: Fine
I had planned to bring in my Barrel of Monkeys

for the kids to explore, but couldn’t find the set.  I’m sure they would have enjoyed it. 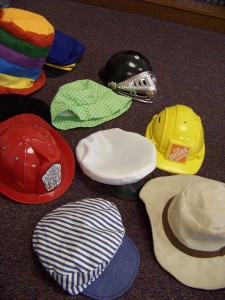 SOCIAL STUDIES: Careers
I brought in a variety of hats from our home dress-up center.  The kids really enjoyed trying on the hats and acting out the different jobs.  Some even stacked up multiple hats on their head like the peddler.