Me on the Map

As we begin our study of North America, I wanted to help reinforce the idea of “continent” with a Me on the Map project.  I’ve seen several variations of these and decided for our purposes the handheld, concentric circles would work best.  I used my Creative Memories circle cutter set to cut 7 different circles from about 3 1/4 to 6 1/4″.  I used cardstock in the following colors:

I found this planet earth coloring page, which fit the largest circle perfectly.  They colored it, wrote “Earth” and glued it onto the black circle. We added star stickers and wrote “Planet” at the bottom.  On the back we glued a sheet with the following facts:

3rd from the sun
Has 1 satellite: the moon
5th largest planet in the solar system
Over 90 million miles from the sun
70% surface covered in water

I also got out our sandpaper globe and reminded them that the Earth is a sphere.  We laid out pictures of the 8 planets and talked about how they all revolve around the sun, their order and their sizes. 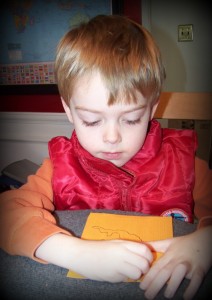 For the North America disk, we tried pin punching.  Basically, instead of using scissors to cut out intricate lines, the child uses a push pin to poke little holes along the line.  I traced the outline of North America onto orange cardstock.  First, we tried pin punching into a cardboard base, but that required too much pressure.  The carpet squares (indoor/outdoor carpet leftover from our porch remodel last summer) worked much better as a base.  This project too MUCH longer than I anticipated.  I plan on purchasing some of the larger wooden pins, hopefully those will work better.  The facts on the back included:

3rd largest continent
Consists of 24 countries
In the Northern and Western hemispheres
English, Spanish and French most common languages
Named after Amerigo Vespucci

We glued the continent onto the blue circle, added fish stickers all over the ocean and wrote “North America.”

For the United States I printed out a map with the state boundaries, but not their names.  I thought I saved it, but I can’t find it now.  On the red circle we glued the map of the US, our national bird (bald eagle) and a picture of our flag.  We also put a star sticker on the capital (Washington D.C.).  The facts we included on the back were:

On our state circle we glued an outline of our state.  Each child drew famous landmarks like  lakes and mountains on their maps.  We also added a star for our capital.  Around the map we glued pictures of the state flag, animal, flower and bird.  On the back we included information about the capital, largest city, state bird, animal and flower.

I chose to do the nearest large city, instead of our smaller suburb.  We added pictures of the logos of the city, zoo and children’s museum.  On the back we listed the county, nickname, and local attractions.

For our street I used 2 pictures: one standing at the end and one of our street sign.  On the back we listed the number of homes on our street, the local park, and other landmarks.

The smallest circle has a picture of our house.  We added number stickers for our address.  On the back we listed the year it was built, sq footage, the swingset, our porch and painting it blue.

I laminated each circle and then trimmed them.  We punched a hole in the top of each and slid a brad through.  Now each circle can spin independently.  The kids love them!

This entry was posted in What We're Doing, What We're Learning and tagged continent, country, craft, geography, me on the map, nationalism, patriotic, social studies. Bookmark the permalink.