During a recent trip to the beach I was reminded of this post.  After a quick consultation with my son we decided to make our own set of rock dominoes.

First, we set off in hunt of the perfect rocks. 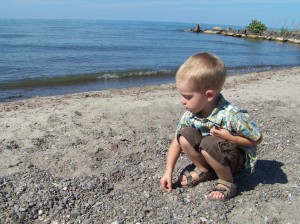 The first set of rocks we started gathering were about 2” in diameter.  They quickly became heavy and we ended up swapping them out for a group closer to 1” in diameter.  We tried to pick oblong shaped rocks, but many are closer to a circle.  Try to find rocks as close in size and thickness as possible.  We opted for very thin dominoes.  You’ll need 28 for double 6s, but I suggest grabbing a couple extra (a couple of ours were too thin and broke).

After selecting the dominoes (28+), we took a few minutes to practicing skipping rocks with the multitude of slightly too big/small/thick/square rocks. 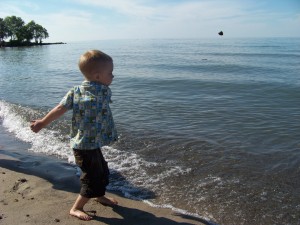 Jedrek is much better at skipping rocks this summer and got 2-3 skips out of a couple throws.

The next step was his favorite: polishing. 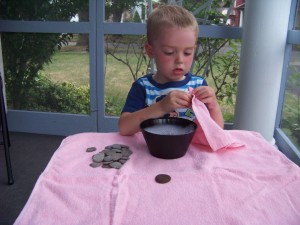 I covered his table with a towel and set out a bowl of slightly sudsy water and a washcloth.  He washed each rock at least 5-6 times.  Every time he finished drying them, he would start washing all over again.  Finally, he determined they were clean enough and we left them out to dry overnight (though I’m sure a few minutes to an hour would be sufficient)

Our materials were the rocks, paintbrush, white paint, cup for paint, and number chart.  I used a chart with the numerals 0-6, but you could also draw out the dots in place of numerals.  Jedrek quickly lost interest in painting, so I painted the lines and dots.  As I finished each rock he placed it on the chart.  We used an all-purpose acrylic paint, which worked well but does not wipe off the rocks… even when it’s still wet.  Another reason it’s a good idea to have a few extra rocks 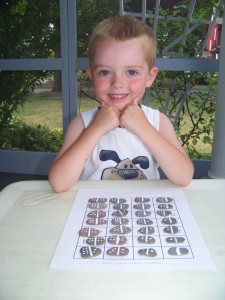 The chart I made is available as a pdf below.