To go with our Ocean Unit this month our Friday Family Movie Night was Finding Nemo.  I went all out with Ocean themed dinner, snacks and dessert.

Dinner:
For dinner we had octopus hot dogs.  I usually slice cooked hot dogs into long skinny sticks because they are one of the most commonly choked on foods.  I’ve even cut them into this octopus shape before.  However, if you cut them into the octopus and THEN boil them, the tentacles curl right up.  Adorable!  My toddler kept holding out his plate and announcing “cute!”  We served the octopuses on a bed of Annie’s Organic Shells and Cheese.  Yummy! 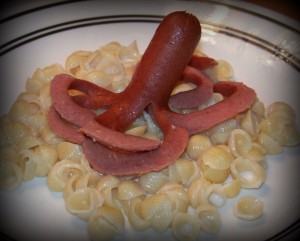 To make the octopus first lay a raw hot dog on it’s side and slice it longways about 2/3 of the way up.  Roll the hot dog 90 degrees and cut again.  Now you have 4 legs.  Cut them each in half lengthwise to make 8.  Bring a pot of water to boiling and drop them in.  We enjoyed watching the octopuses “swim.”  They only took a couple minutes to cook.

Snack:
We had fish tanks for our snack.  You’ll need graham crackers, vanilla frosting, blue food coloring and goldfish.  The boys enjoyed helping me turn the frosting blue.  It helps to transfer the frosting into a larger bowl before adding the food coloring, easier to get a consistent color.  Once we were happy with our blue “water” we spread it on graham cracker halves.  The boys took turns adding goldfish to the water, counting as we went. 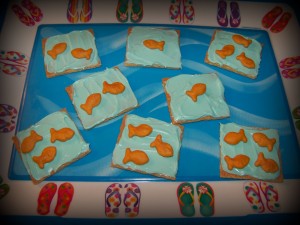 The combination of graham cracker, frosting and cheese was surprisingly good!  You could also use Ritz crackers and cream cheese for a slightly healthier snack.

Dessert:
Dessert should be made first, because it takes the jello awhile to set.  We made blue raspberry jello and poured it into 1 cup size glass bowls.  After it has chilled for about 20-30 minutes, add some gummy fish (swedish fish fall apart in the jello).  We waited almost an hour and the jello was a little too set to add the fish, so they’re mostly on the surface. 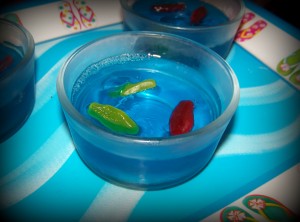 Movie Review:
For those who haven’t seen the movie, it’s about an overprotective father clownfish and his adventurous son.  While defying his father’s rules the son swims to the “dropoff” and is captured by a scuba diving dentist.  Now the storyline is split between Nemo (the son) desperately trying to escape from the tank in the dentist’s office and his father (Marlin) trying to overcome his fears of the ocean to find his son.

The beginning of the movie is what I was most concerned about.  In normal Disney fashion, a parent has to die.  In the first few minutes we see Marlin and his wife making a home and looking after their hundreds of eggs.  When the mother and all the babies but Nemo are eaten, Marlin becomes very protective of Nemo.  My sons handled the beginning much better than I had expected.  They really enjoyed all the tropical sealife around the Great Barrier Reef and of course the turtles.

The movie led to discussions of coral reefs, currents, and a wide variety of sea life.  It was a great compliment to our Ocean Unit and some quality family time!