The chickenpox hit our house a couple weeks ago.  Other than a day or two of feeling sick, I had a preschooler who was dying to play outside or with his friends, but was too contagious to leave the house for several days.  He’s been asking me if we could make a jet pack since we did the Outer Space Unit back in June… so I decided now was finally a good time.  Here’s how we did it…. 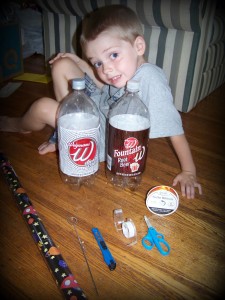 Carefully use the Exacto knife to cut off the bottom of the bottles. 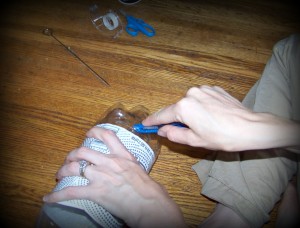 My helper also served as photographer when my hands were full….

Cut a rectangle of wrapping paper 3-4 inches taller than the bottle and wide enough to overlap a couple inches around the bottle.  Cut another one the same size for the other bottle.  Bonus, our wrapping paper had lines printed on the back so my little helper got in some scissor practice… 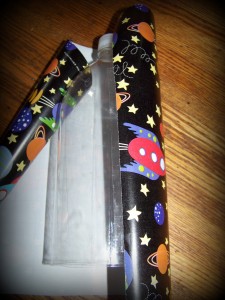 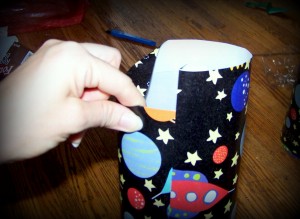 Using a metal skewer, ice pick, or scissors, poke 2 holes in each bottle.  The holes should be along the seam of the paper.  I placed them about 2″ and 5″ from the bottom of the bottle, but the important thing is that the holes are in the same spots on both bottles.  I slid one hand in the bottle to keep from squishing it, but be very careful… 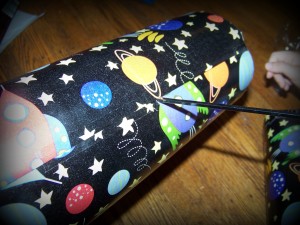 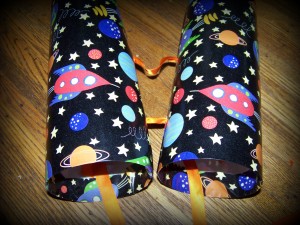 Pull the ribbons tight so that the bottles are up against each other, making sure the tails on each side are even.  Now reach inside one bottle and tie the top ribbon to the bottom ribbon.  I just used a double knot.  Do the same with the other bottle, being sure the ribbons are pulled taut. 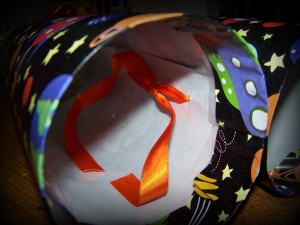 At this point my helper was much too excited to wait while I took pictures… but the next step should be easy enough.  Using the metal skewer/ice pick/ scissors poke 2 holes in the back of each bottle, one near the top (before it slopes in) and one an inch or two up from the bottom.  Now thread a ribbon 12-15″ long into the top hole, reach inside and tie a knot.  Thread the other end of that ribbon into the bottom hole of the same bottle and tie a knot inside the bottle.  Do the same with the second bottle.  You may need to try on the jet pack and adjust the tightness of the ribbons for comfort.  It took us a couple tries to find a length long enough that he could slip it on but tight enough that it didn’t move around too much when he ran. 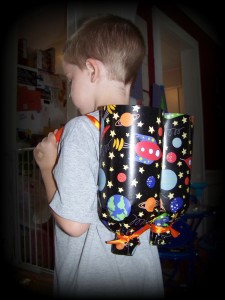 He’s modeling the jet pack upside down here, but didn’t want to take it off, lol.

As a finishing touch, gather the wrapping paper around the neck of each bottle and tie ribbon to secure it.  You could also tape some extra ribbon, streamers or tissue paper coming out the bottom of the jet pack as flames.  If you used solid paper you may want to decorate it with stickers or add your child’s name.  Be creative! 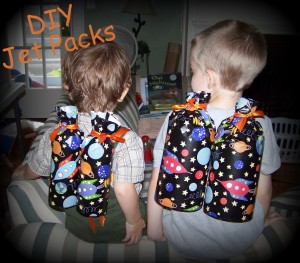 During the final stages of jet pack construction, Little Brother woke up from his nap and immediately wanted his own jet pack.  We used 24 oz bottles to make his, but tying the ribbons inside was quite a bit more difficult.  Even so, I think this size fits him much better.    They had all kinds of fun jumping off the arm of the couch and “flying” onto the cushions!  Since we used ribbon and wrapping paper from the dollar store, total cost was $2.